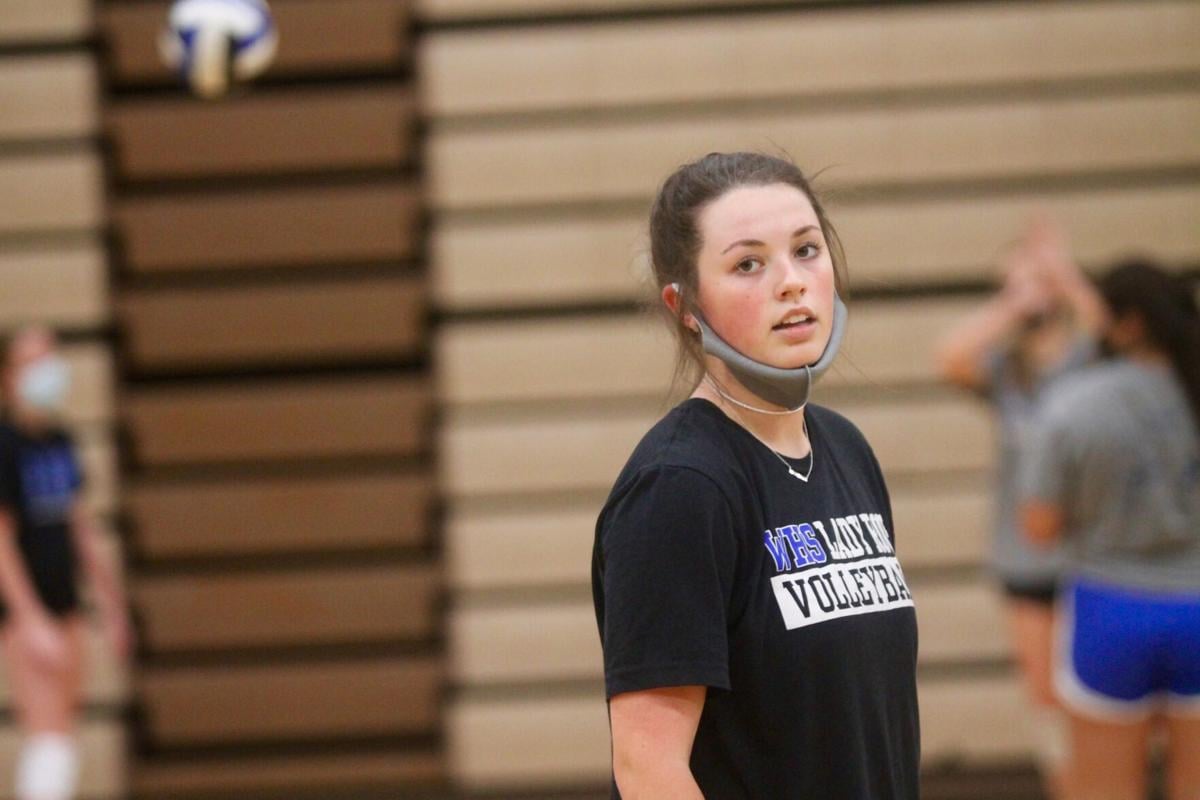 Linsey Lee led the Lady Roos in digs and helped her team improve its record to 9-2 on Tuesday. 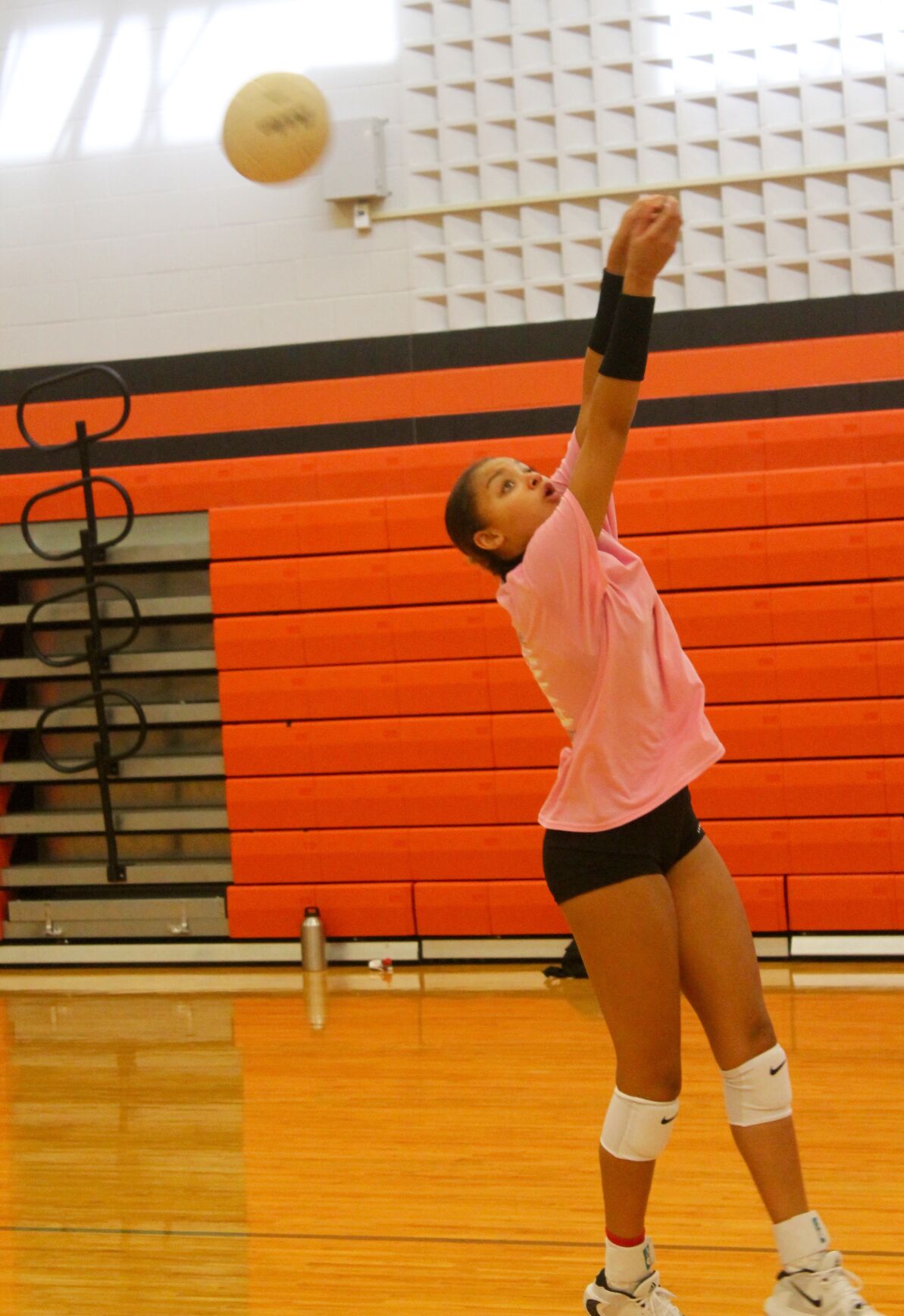 Audrey Pearce led the Ladycats with five blocks, but Aledo suffered an unexpected loss on Tuesday. 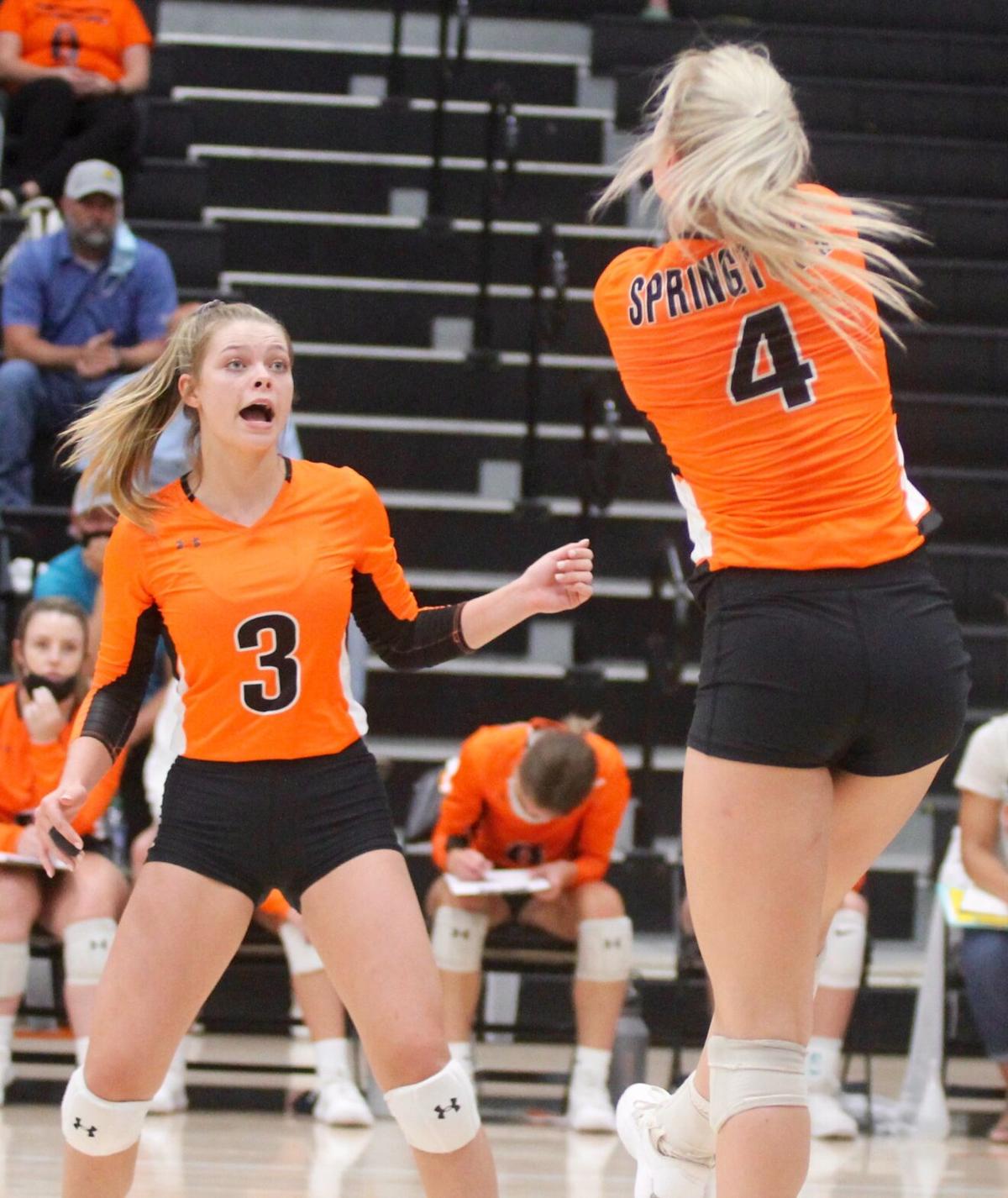 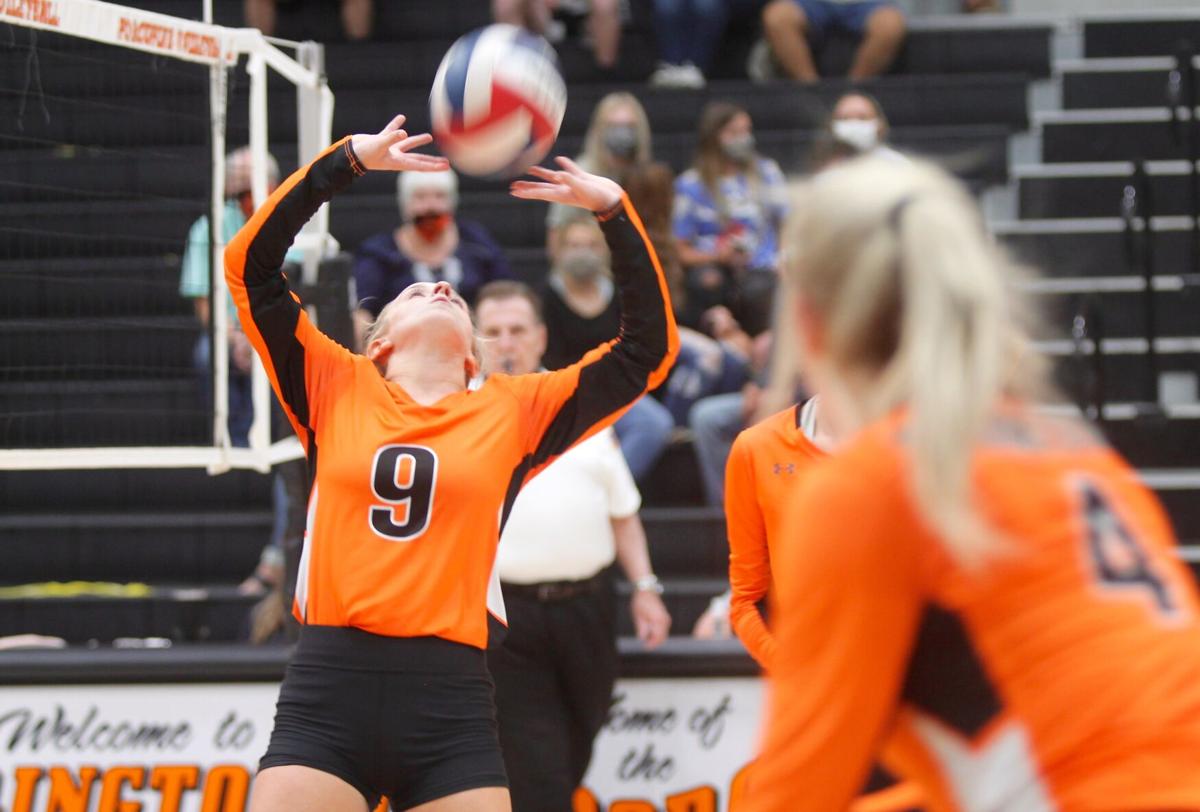 Skylar Holland prepares to set up the ball for a teammate to deliver a kill shot. 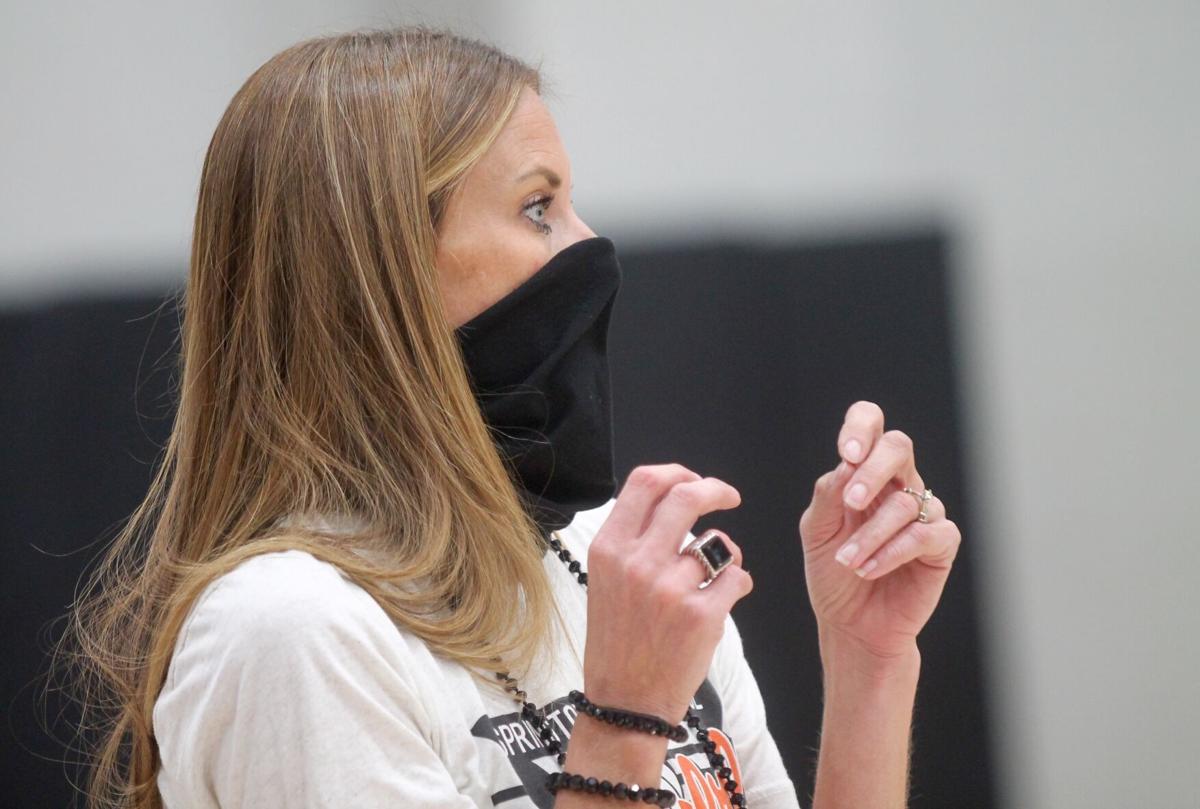 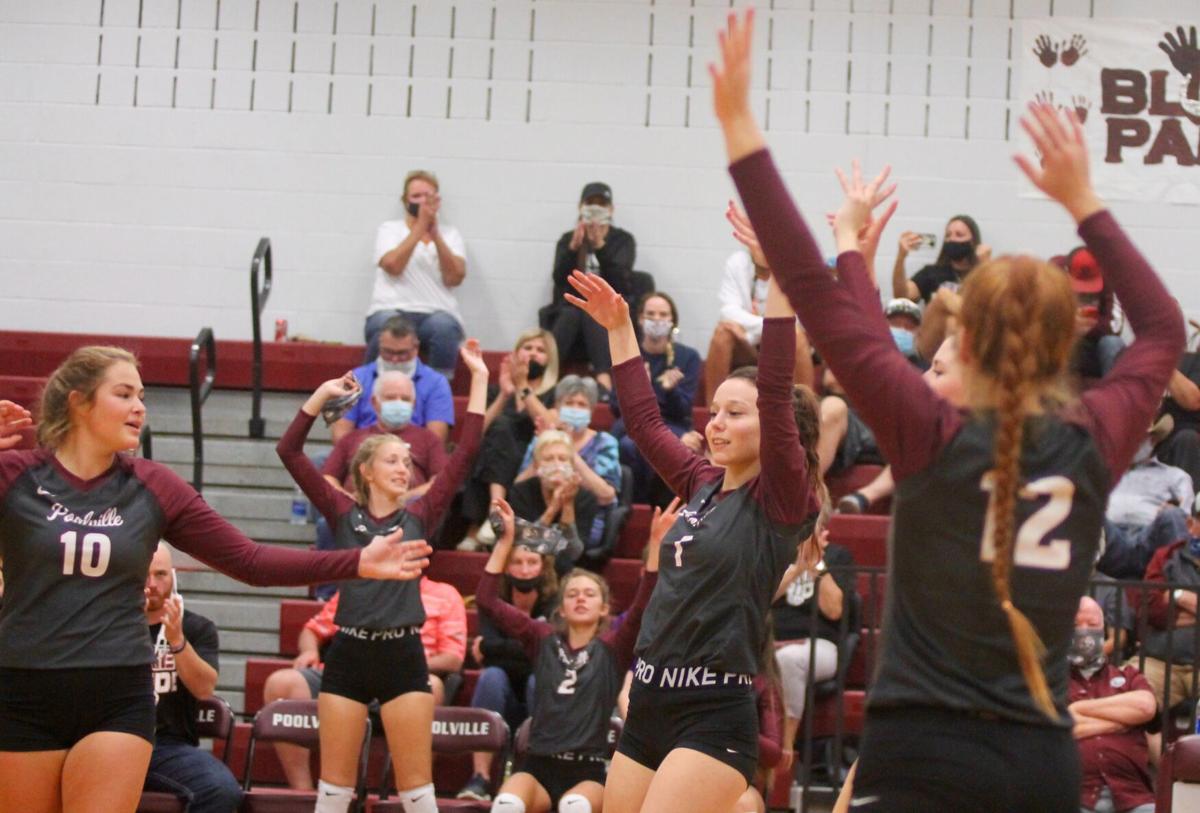 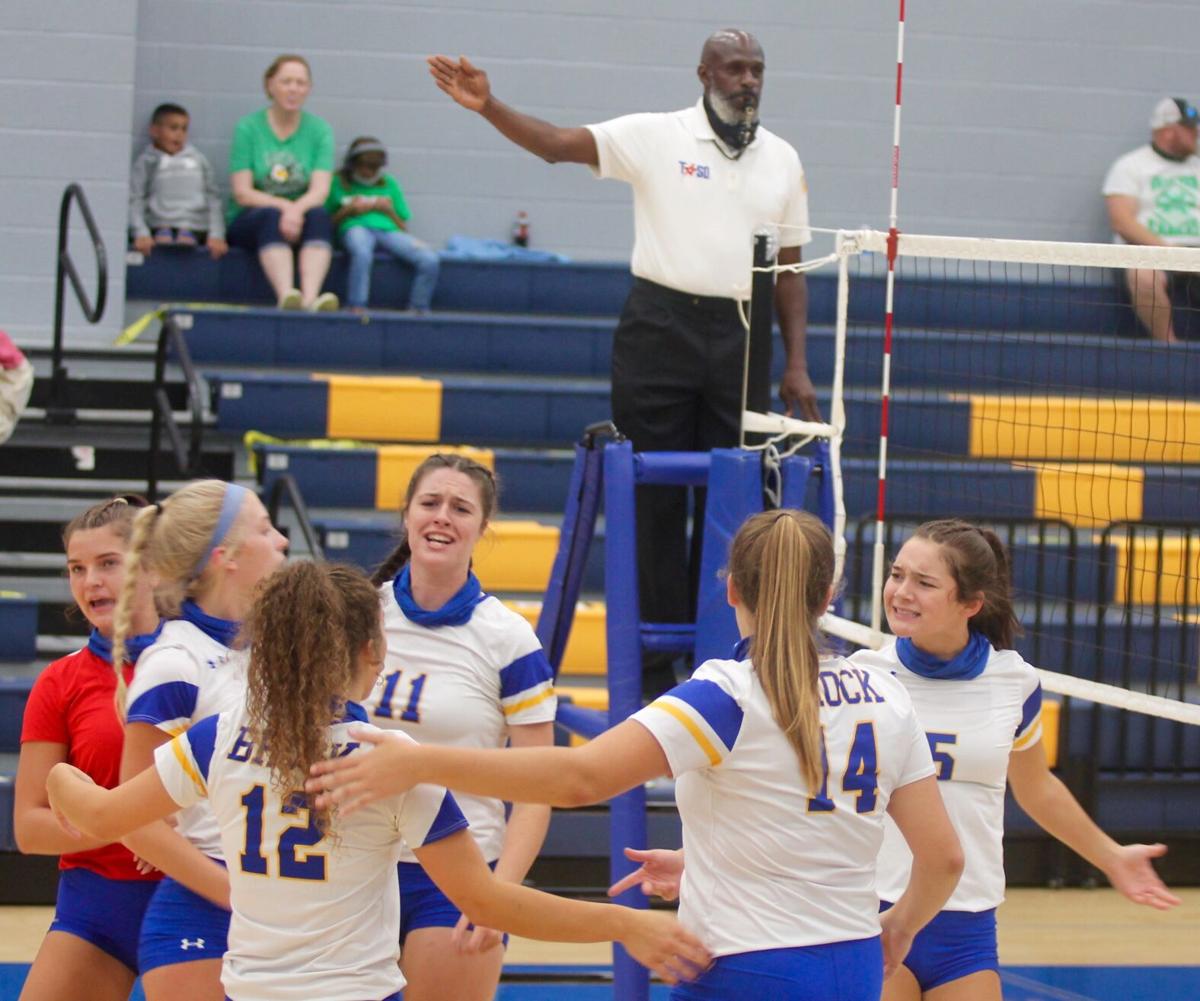 Brock is back in the W column. 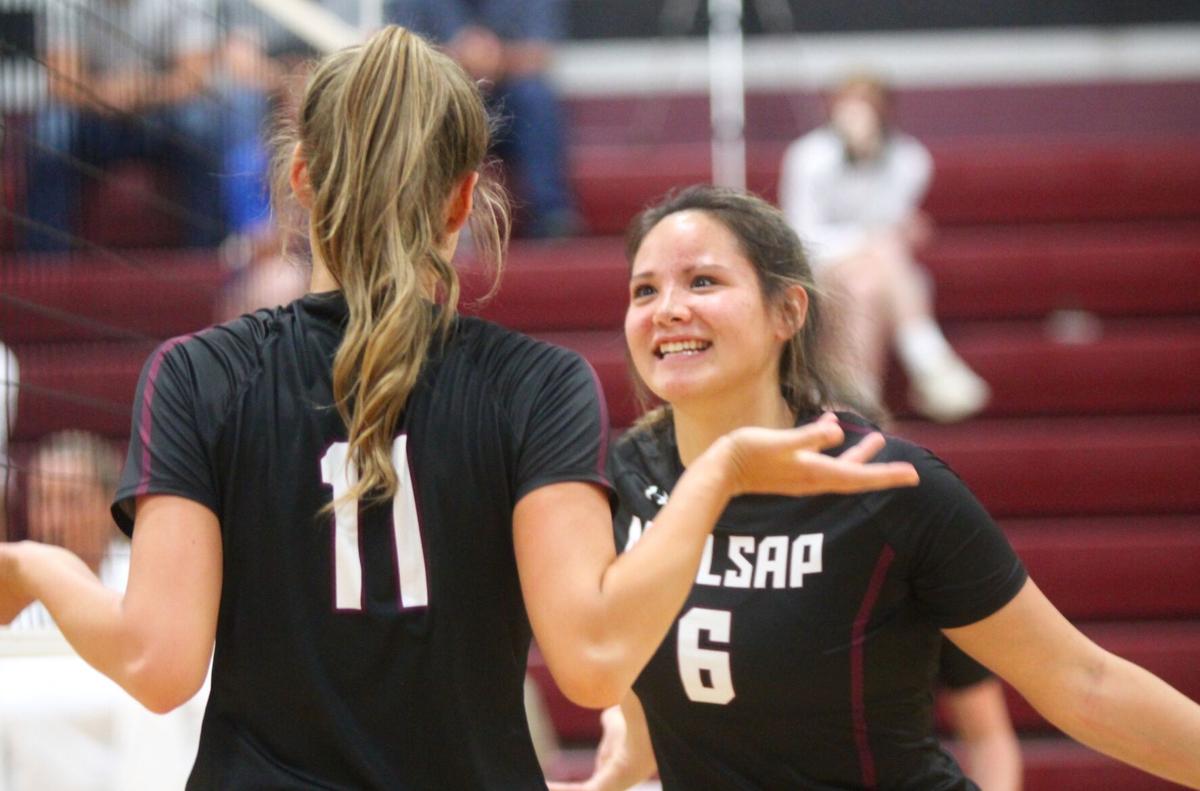 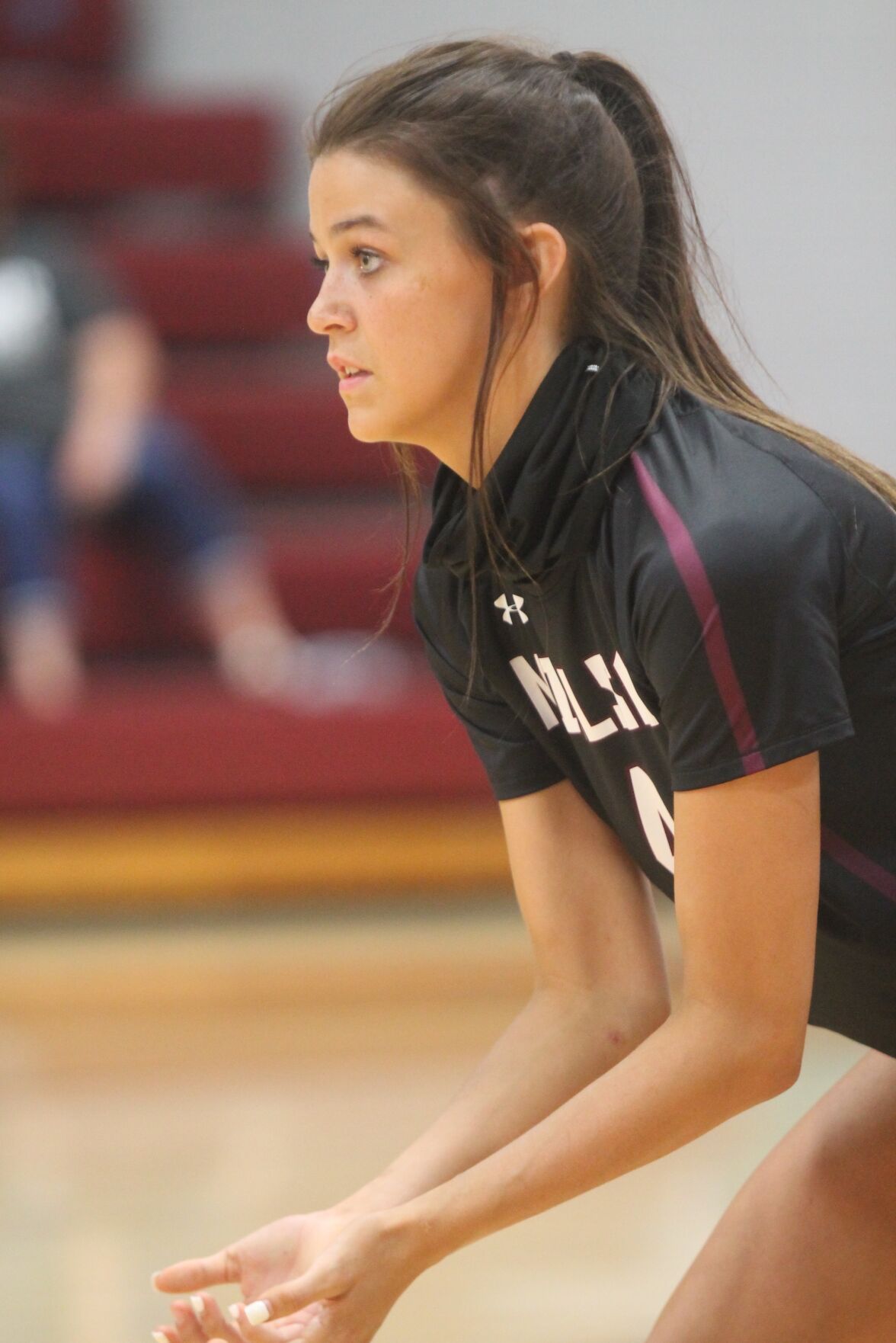 Taylor Cotton added three aces of her own for Millsap. 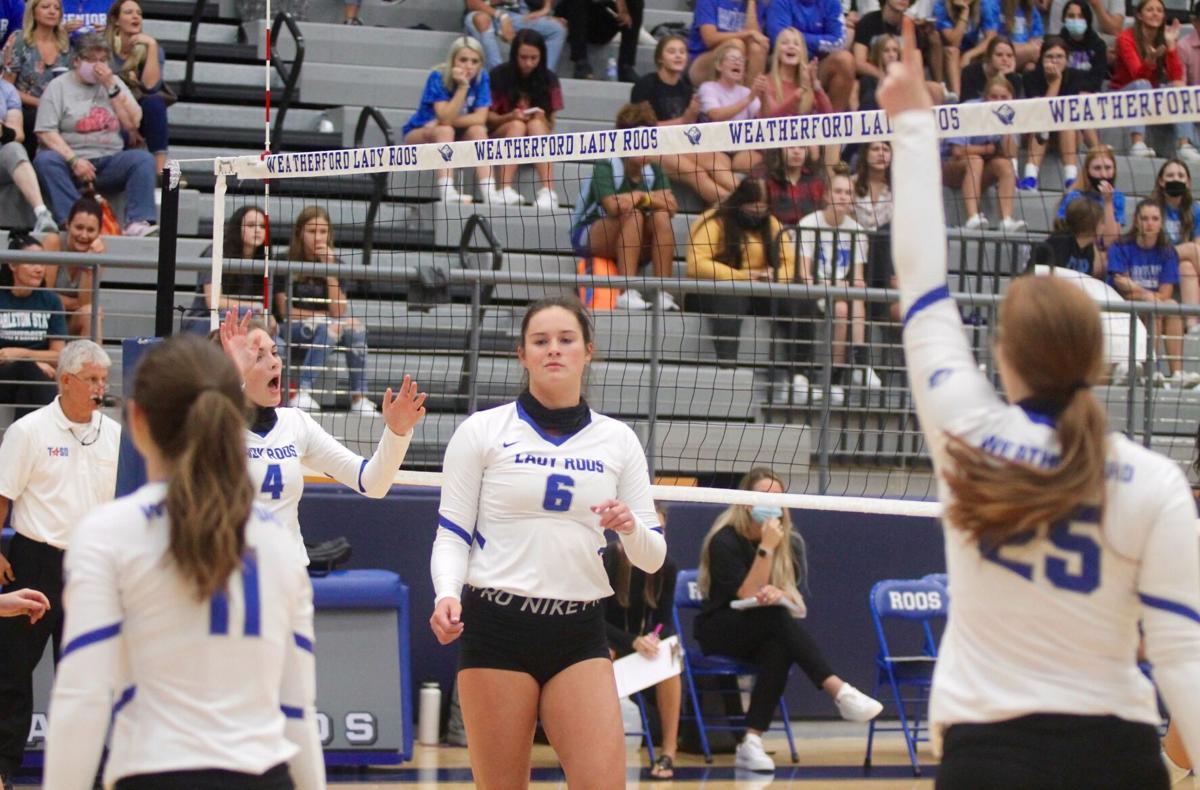 Weatherford's Abbie Lane, center, and her Lady Roos are having a strong season so far. 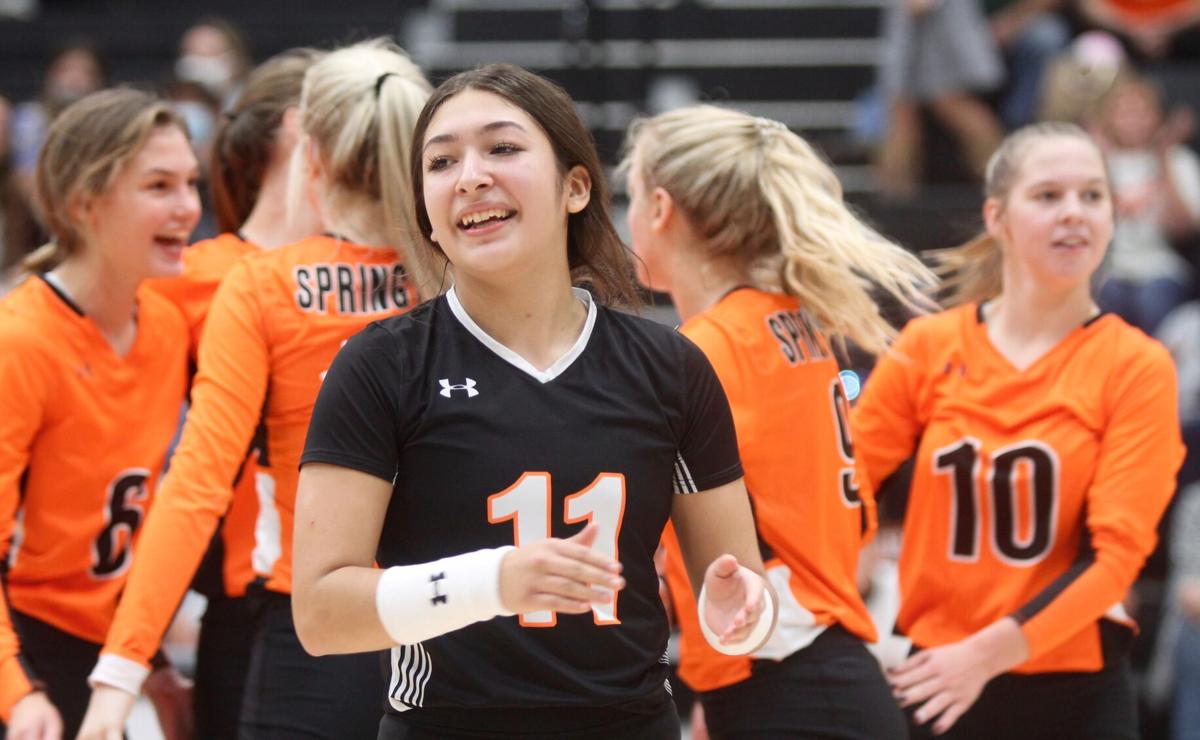 The Lady Roos traveled to Trinity on Tuesday but not as tame tourists. Instead, they hit town and thumped the Trojans in straight sets — although that middle set didn’t come easily: 25-11, 30-28 and 25-12.

“We played really well and withstood Euless Trinity’s push in the second set,” Weatherford Head Coach Nicholas Gay said. “We were able to start out to quick leads in all of the sets, and that was key in taking out their loud and cheerful crowd.”

The senior Roos led the way, with Lynsey Lee nailing 10 kill shots and Abbie Lane right behind with nine. Sophomore Kate Hansen added eight of her own. Lee tallied 20 digs, received 15 serves and protected the net with a block. Another senior, Logan “Shazam!” Loran, made her teammates shine in a selfless set-em-up manner — she recorded all but two of Weatherford’s 43 assists. Volleyball Roundup appreciates the hardworking players who specialize in assists, and Loran is among the most prolific. She owns 293 of the team’s 383 assists this year

Loran added 10 digs, three blocks, three kills and an ace to her stat sheet for another big night. Senior Kayleigh Bateman scored three of the team’s seven aces and has 21 for the year.

The Roos are among the area’s best teams this season, currently ranked No. 15 in the region between Martin Arlington and Springtown.

Next up for the Lady Roos is a special game — homecoming.

“We are looking forward to the challenge of playing a new opponent and to see if we can be mentally tough to overcome all the challenges a homecoming week presents — but I know our kids will do a good job of that,” Gay said.

Weatherford (9-2) plays at 5 p.m. Friday at home against North Crowley (1-3) in a district matchup at the NGC Activity Center.

“Although it was a tough loss, our team played well,” Rams Head Coach Erin Rincon said. “It is always exciting to play teams that move the ball quick. It speeds up the tempo of the game.”

She liked seeing several of her players, including Kyla Griffin, Meagan Waldrum and Brooklyn Ellis, blocking shots at the net.

Next up? Another good team.

File this game in the “Say Wha?” folder. The Ladycats were on a five-game win streak and 9-1 for the season when the middling Keller Indians rolled into town hauling a losing record.

Then, the Indians knocked off the Cats in three sets.

Aledo is ranked 21st in the state. Keller is 205th. Games, though, don’t always follow the numbers, and teams have good days and off days, just like us all.

Aledo’s Lilly Taylor led the team in kill shots and serves received. Mattie “Worker” Gantt notched 15 of the team’s 20 assists. Abby Thompson led in digs with 17, followed by Gantt with 15 and Molly Tucker with 10. Audrey Pearce led with five blocks, and Tucker and Addison Denbow both served up a couple of aces.

The game was as exciting and nail biting as the numbers indicate.

“That was fun — we like a rollercoaster,” Springtown Head Coach Leighann Strickland said with a chuckle afterward.

In the first match, Springtown took a quick 5-0 lead but lost. In the second, they began with a big deficit and fought their way back to win. All the sets were close and included extended volleys kept alive by desperate dives and over-the-shoulder returns.

In the pivotal fifth set, Springtown was down 1-5, and Azle seemed to possess the momentum. The Lady Pines regrouped during a timeout, returned to the court and began to fight their way back slowly. Before long, they had whittled the score to 5-8. They fought to 7-9, tied the game 9-9, took the lead 11-10, kept it despite a strong final push by the Hornets and sealed the deal while the hometown crowd filled the gymnasium with cheers.

Strickland was proud of her team for fighting back after falling behind.

“We haven’t been able to do that in several years,” she said. “Our mentality is a lot tougher than it has been in the past, which is a big bonus.”

She credited the team’s experience.

“We have several returners, several kids who play year round, and that automatically helps us in the long run to stay mentally tough,” Strickland said.

Despite the Lady Pines’ winning record and talented team, they remain in third place behind Decatur and Krum, the two teams that have beaten them this year.

Springtown will have a chance at redemption. The Lady Pines will face both teams again before the regular season ends. Strickland characterized their district as the toughest in Texas.

Seven sweeps in a row — and 13 for the season — for the mighty Monarchs! The team is seeking its fifth consecutive district championship.

The Lady Eagles shook off last week’s loss to Peaster and came roaring back during Tuesday’s road trip to Dublin, sweeping the Lions in straight sets: 25-13, 25-14 and 25-14.

Ava Tanner led Brock with a dozen kill shots and tied with Hailey Little for the team lead in digs with 17 apiece. Little also led in serves received. Marlee Garcia paved the way in assists with 16. Kylie Hoster nailed five aces and a dozen assists.

The Lady Bulldogs displayed heart and relentless effort during Tuesday night's game, including losing their starting libero halfway through the first set to an injury.

“Instead of letting the adversity of losing such a key player rattle them, the Lady Bulldogs remained confident and united together to get the job done,” Millsap Head Coach Kylie Serrato said. “A few girls had to step up and play in positions they’ve never had to play before, and not only did they get the job done, but they did it in an impressive fashion.”

Serrato expressed pride in the girls for their individual performances but was especially happy to see her team’s  “determination to not let the obstacle at hand be bigger than their will to win.”

Kennedy Burkhall led in kills and blocks and added 18 digs.

Loren Morazzano notched 34 digs to lead the team, and Cotton and Allison Keplinger had 17 each.

Baylee Chriestenson led in assists with 25, and Van Dyke tallied 19.

Next up for Millsap is a tough district rival.

Peaster, Strawn, Perrin-Whitt were off