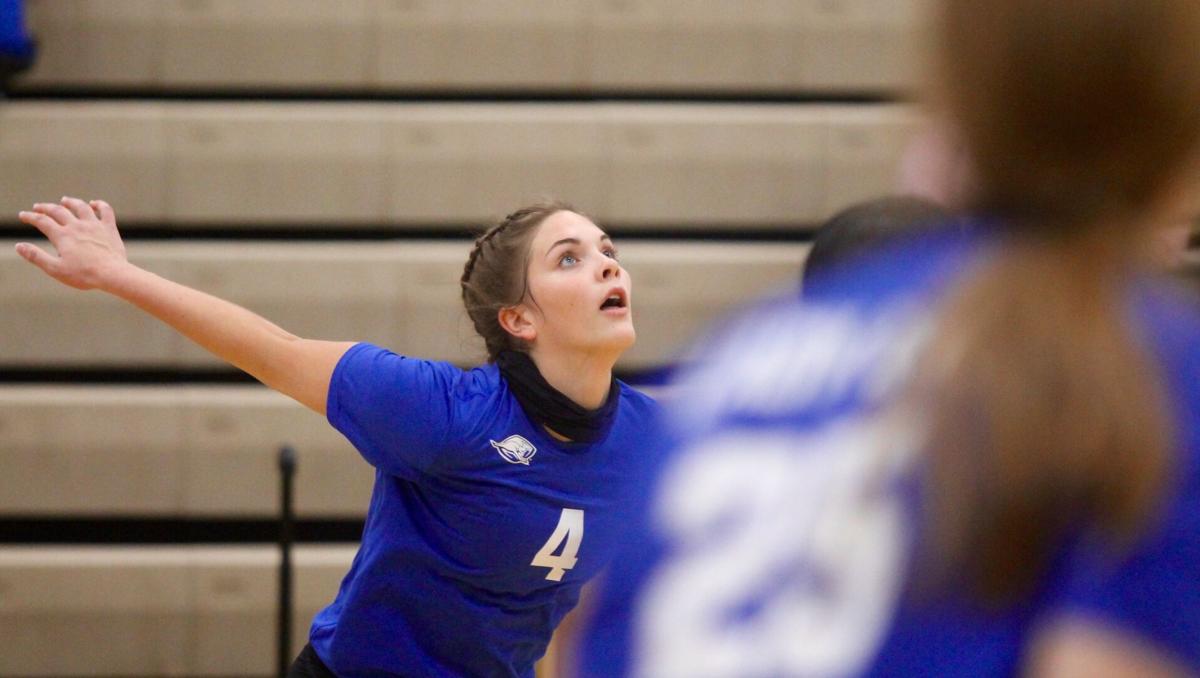 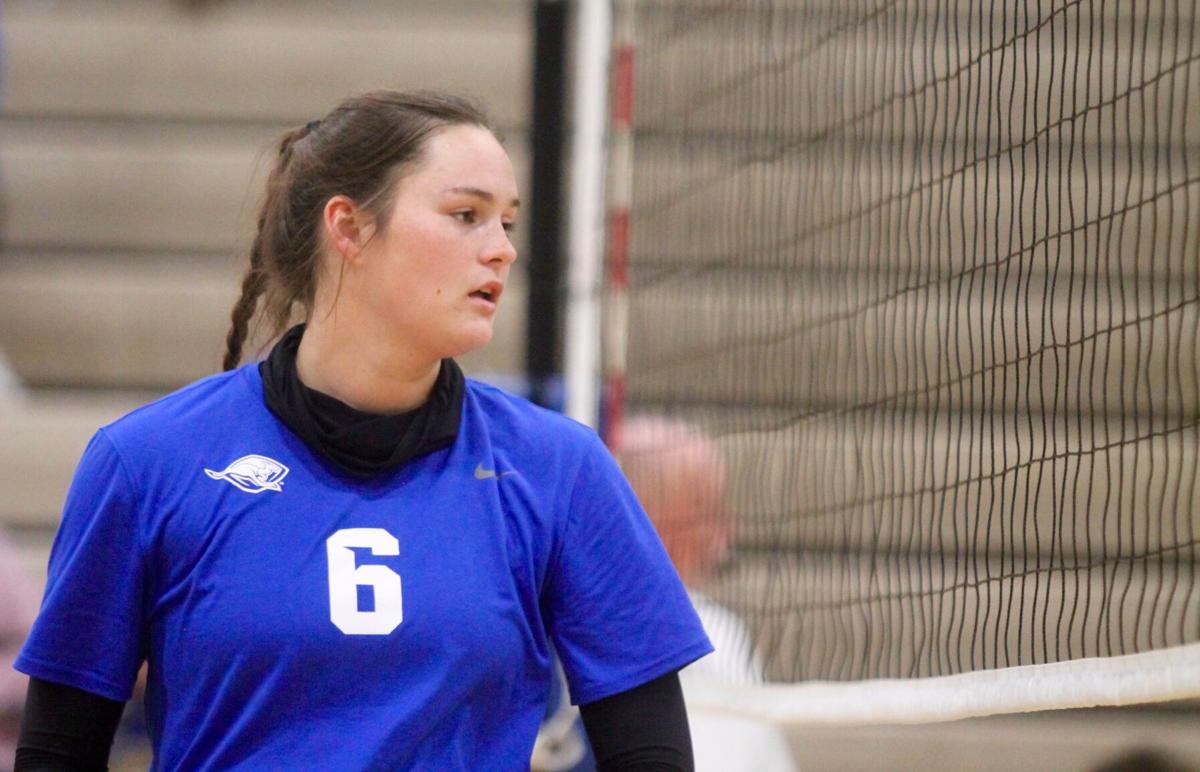 Weatherford's Abbie Lane controlled the net, leading the Lady Roos in blocks and kills on Tuesday. 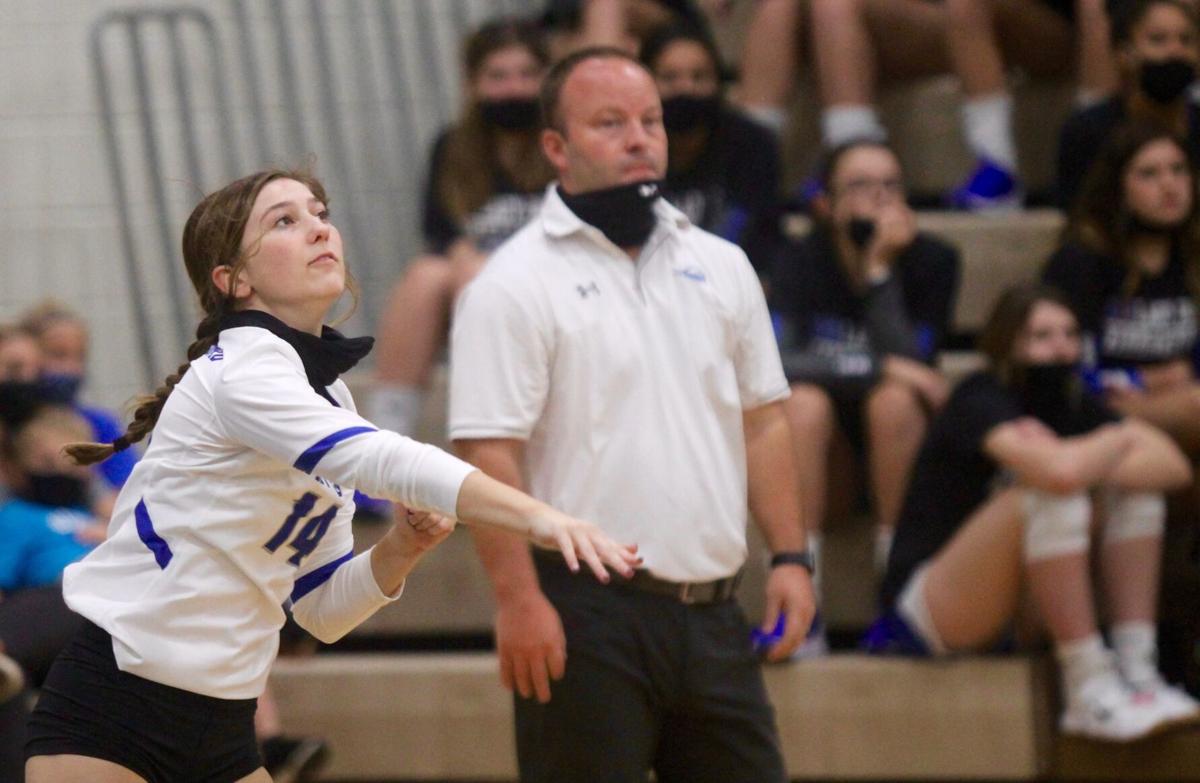 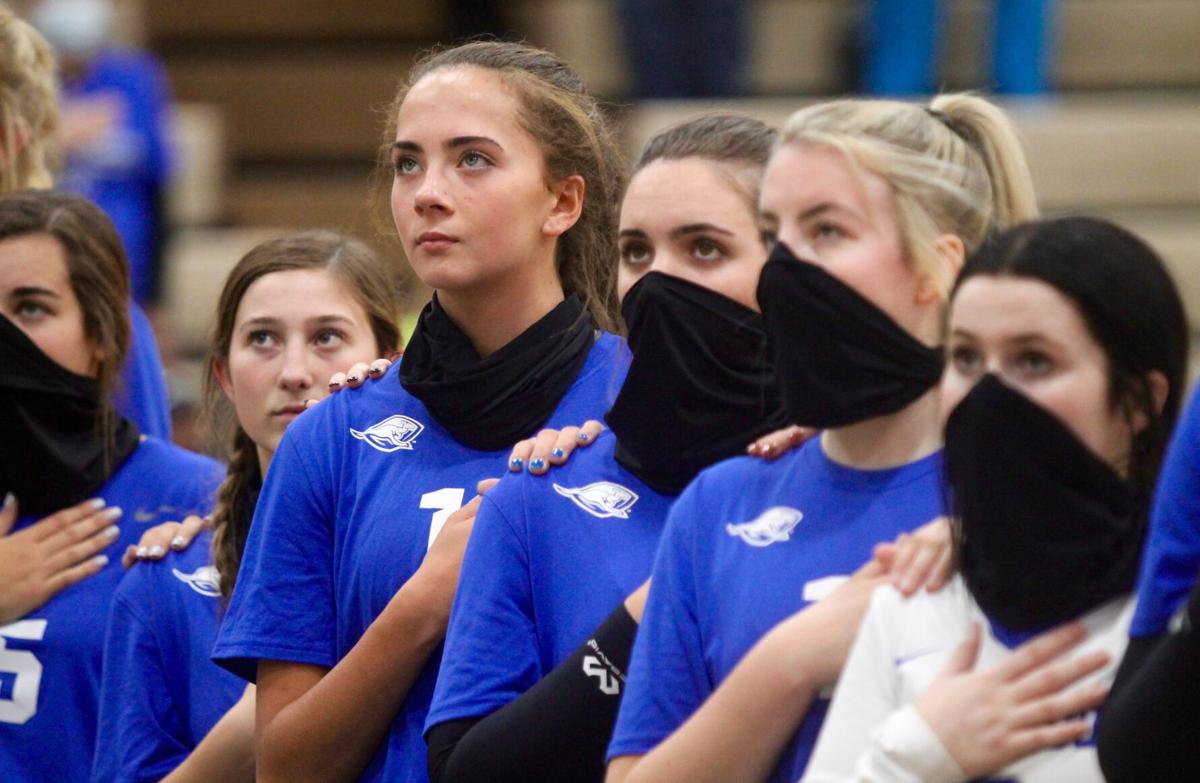 Ashley Carlile, center, and her teammates show respect for the flag during the national anthem. 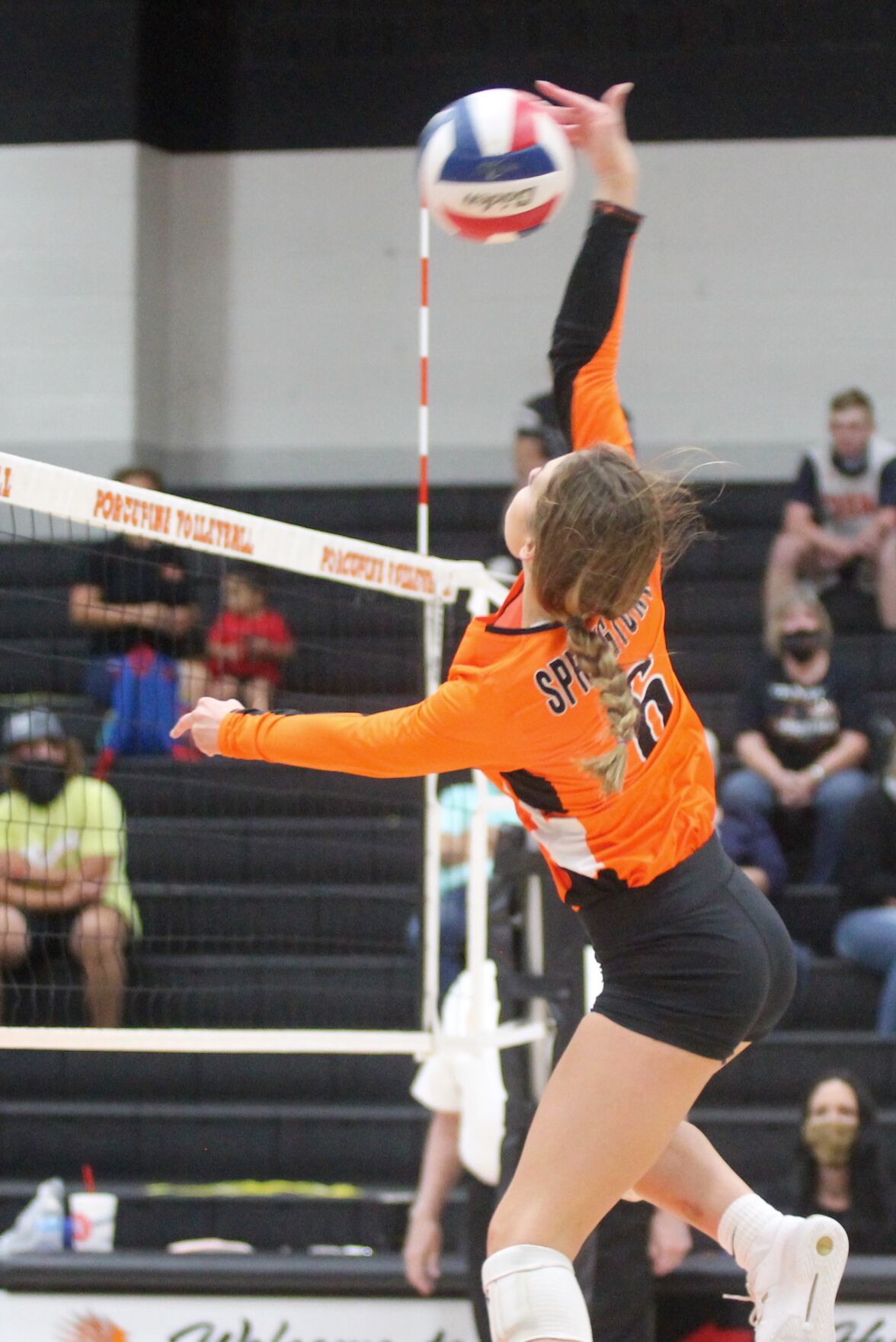 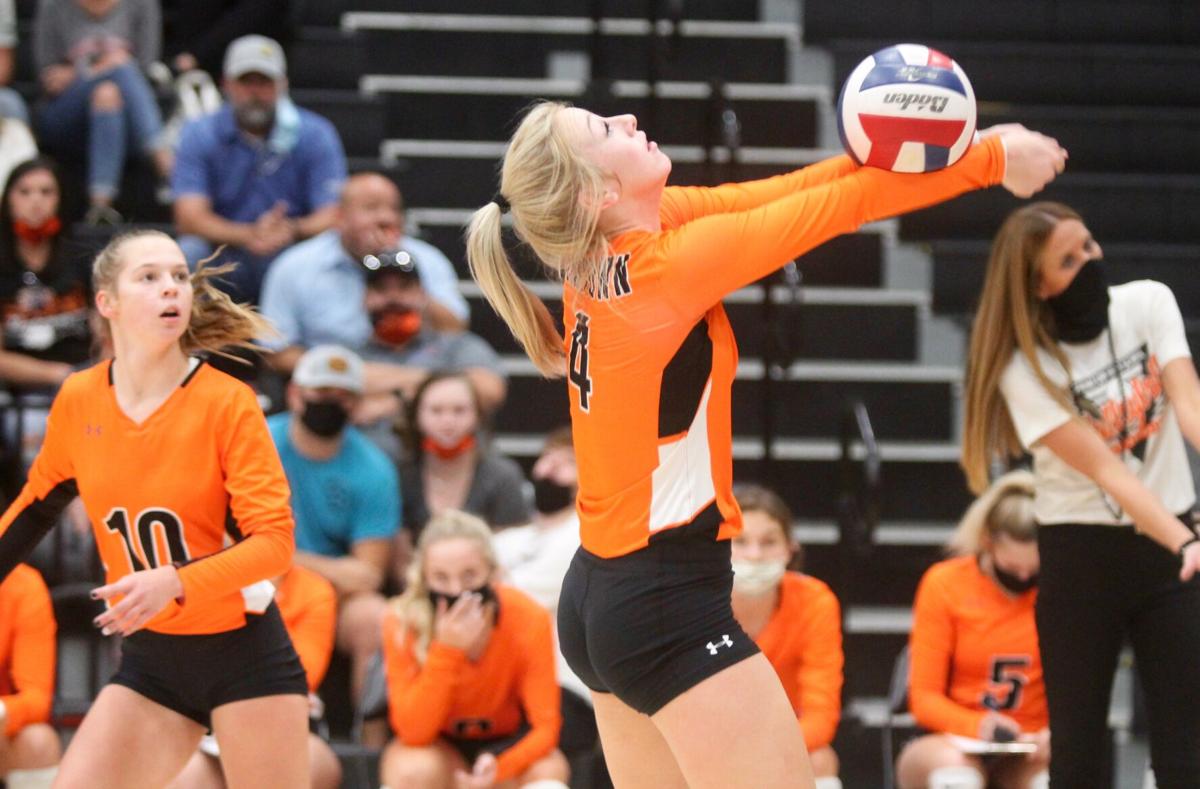 Railey Druxman led her Lady Pines in just about every category on Tuesday. 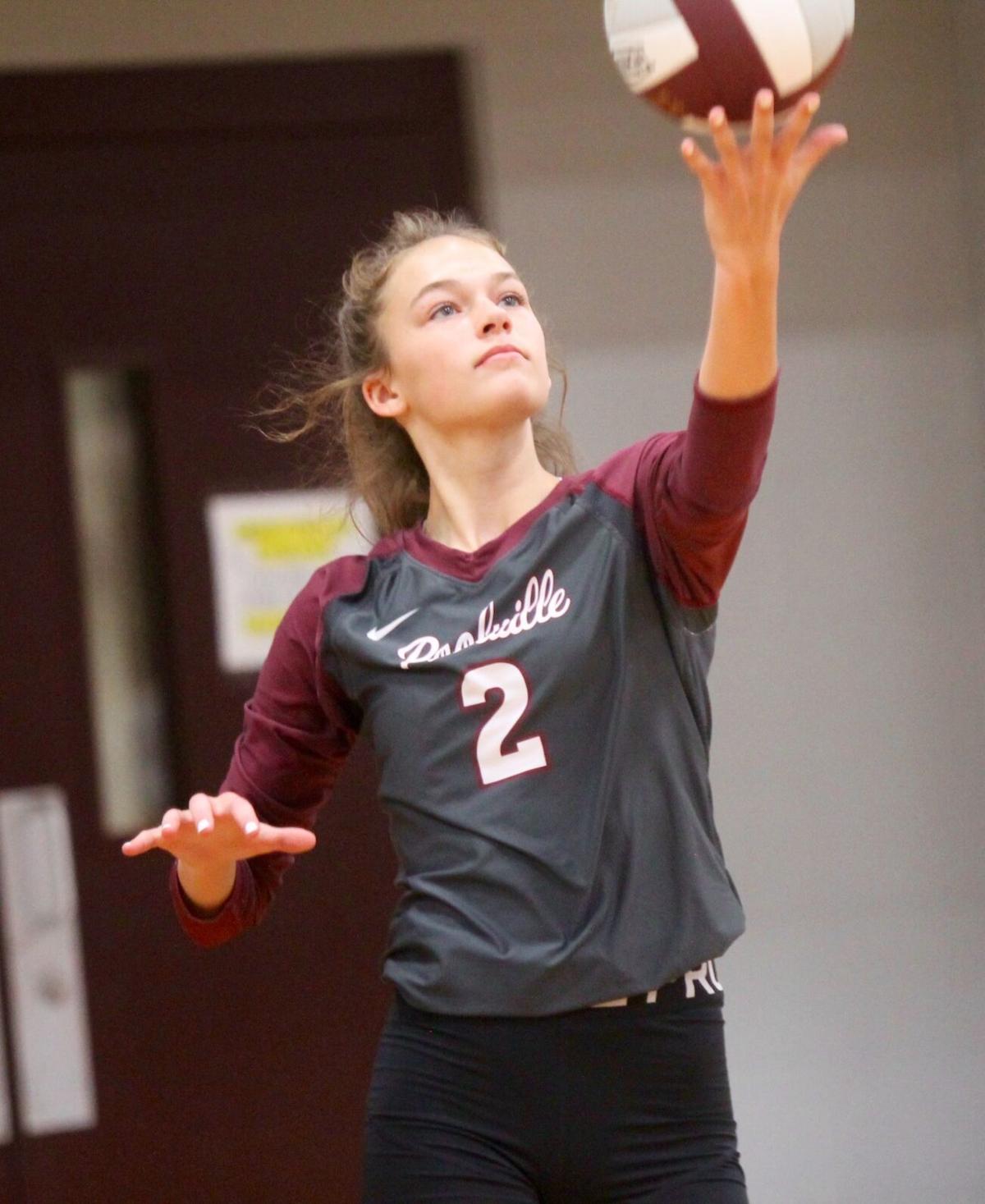 Makaylee "Nemo" Ray prepares to serve for the mighty Monarchs of Poolville. 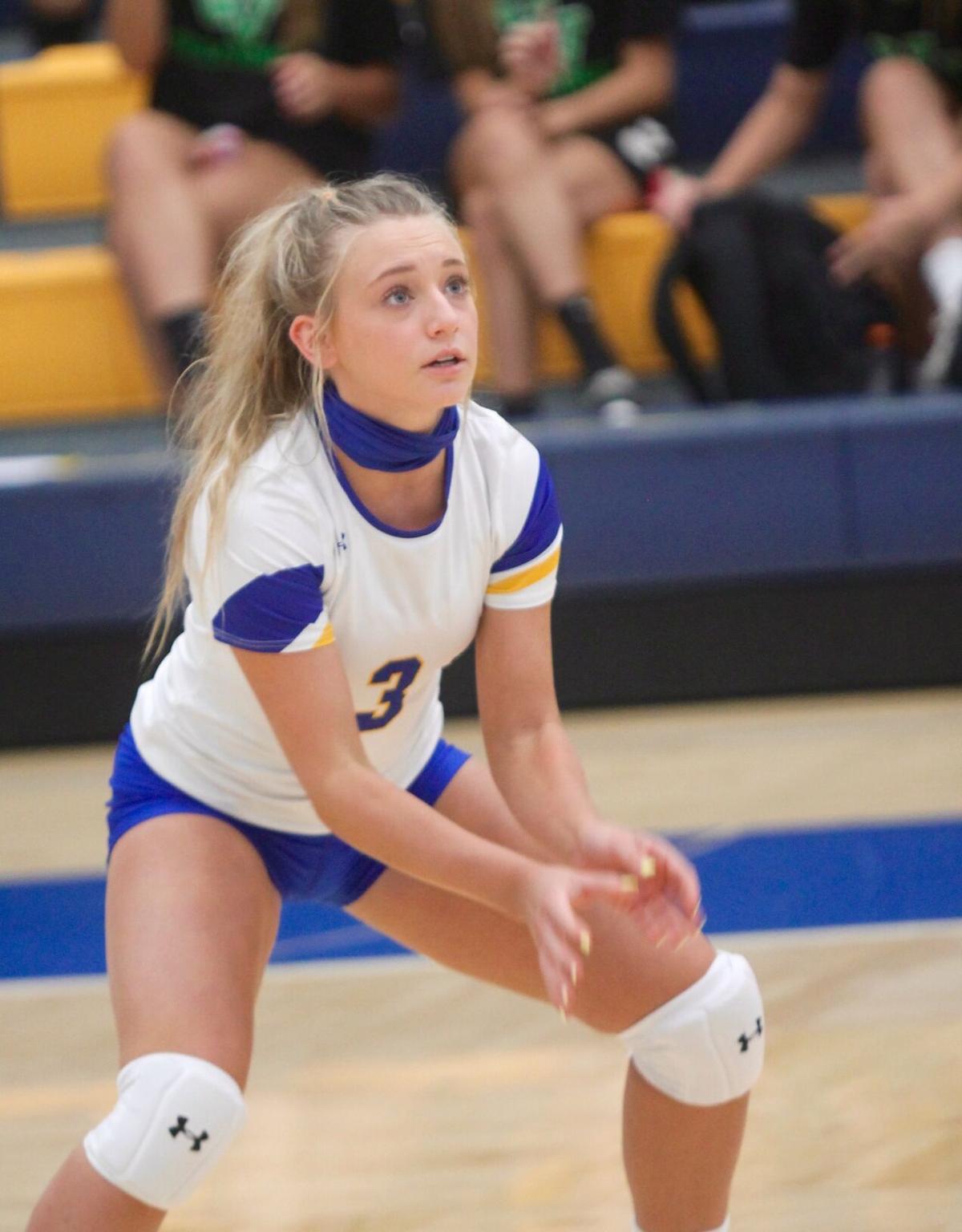 Hailey Little was all over the court on Tuesday during Brock's win. 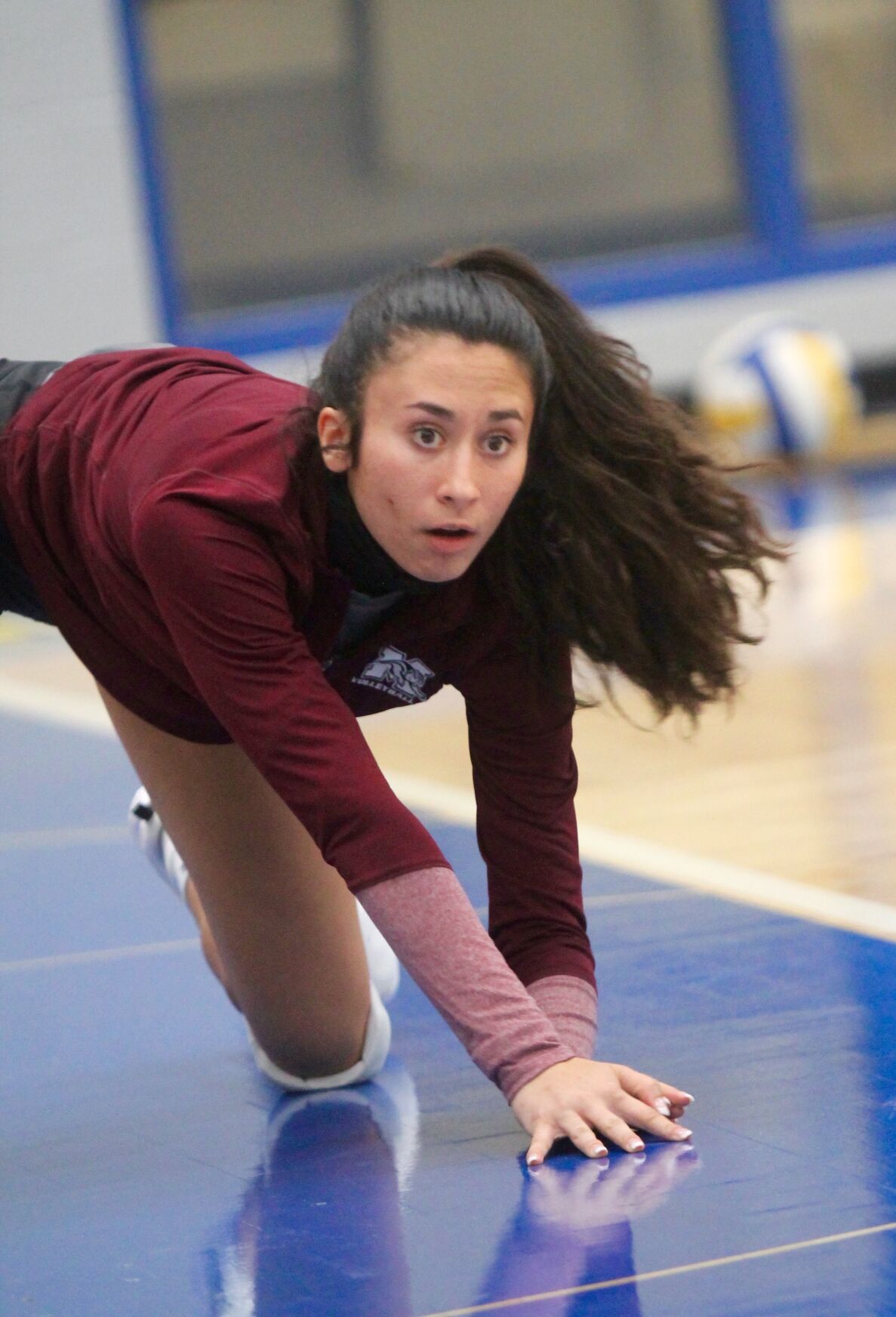 Millsap's Alexis Mejia was one of three teammates who recorded double-digit digs on Tuesday. 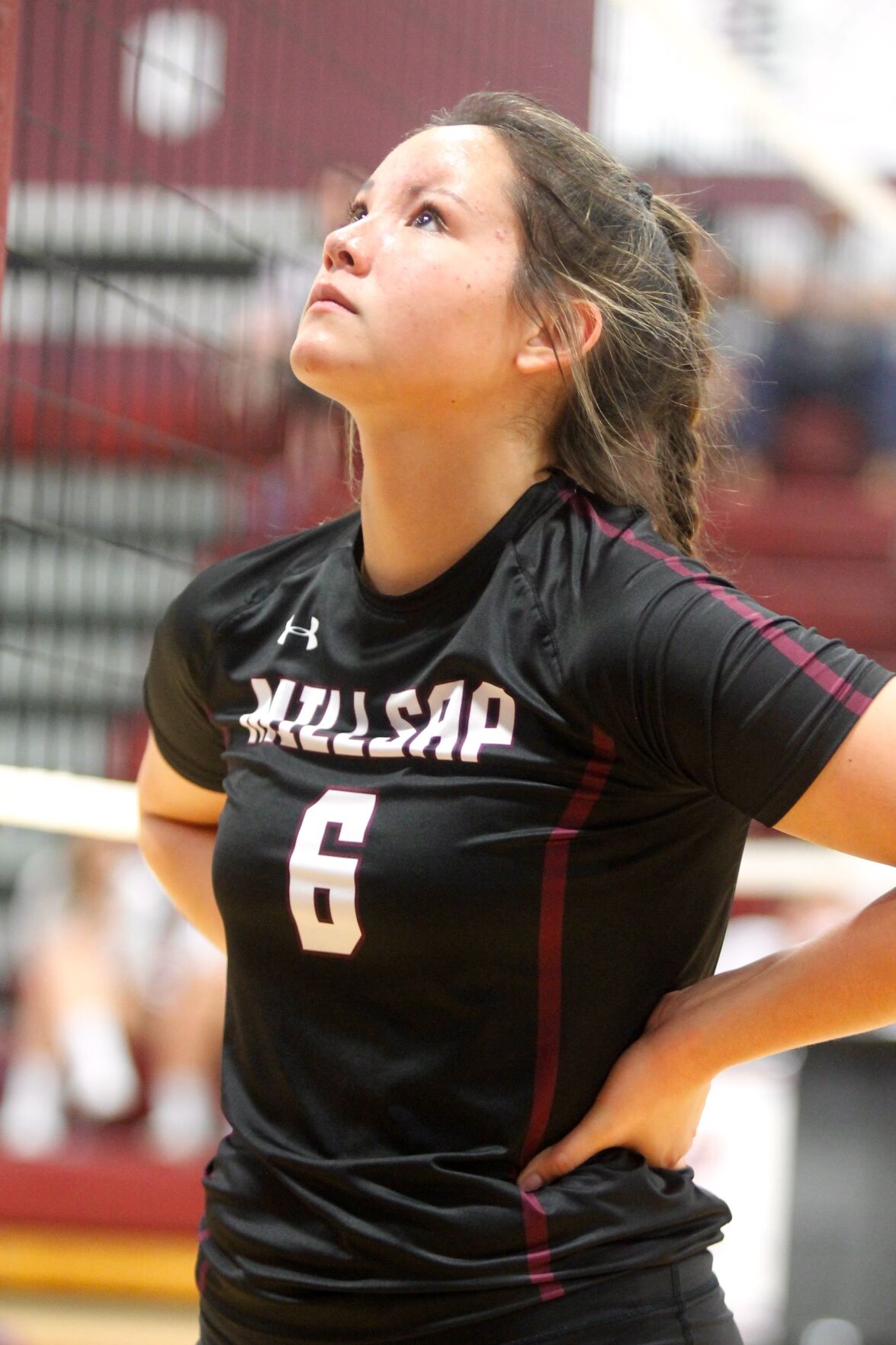 Millsap's Allison Keplinger led her team in aces and kills on Tuesday. 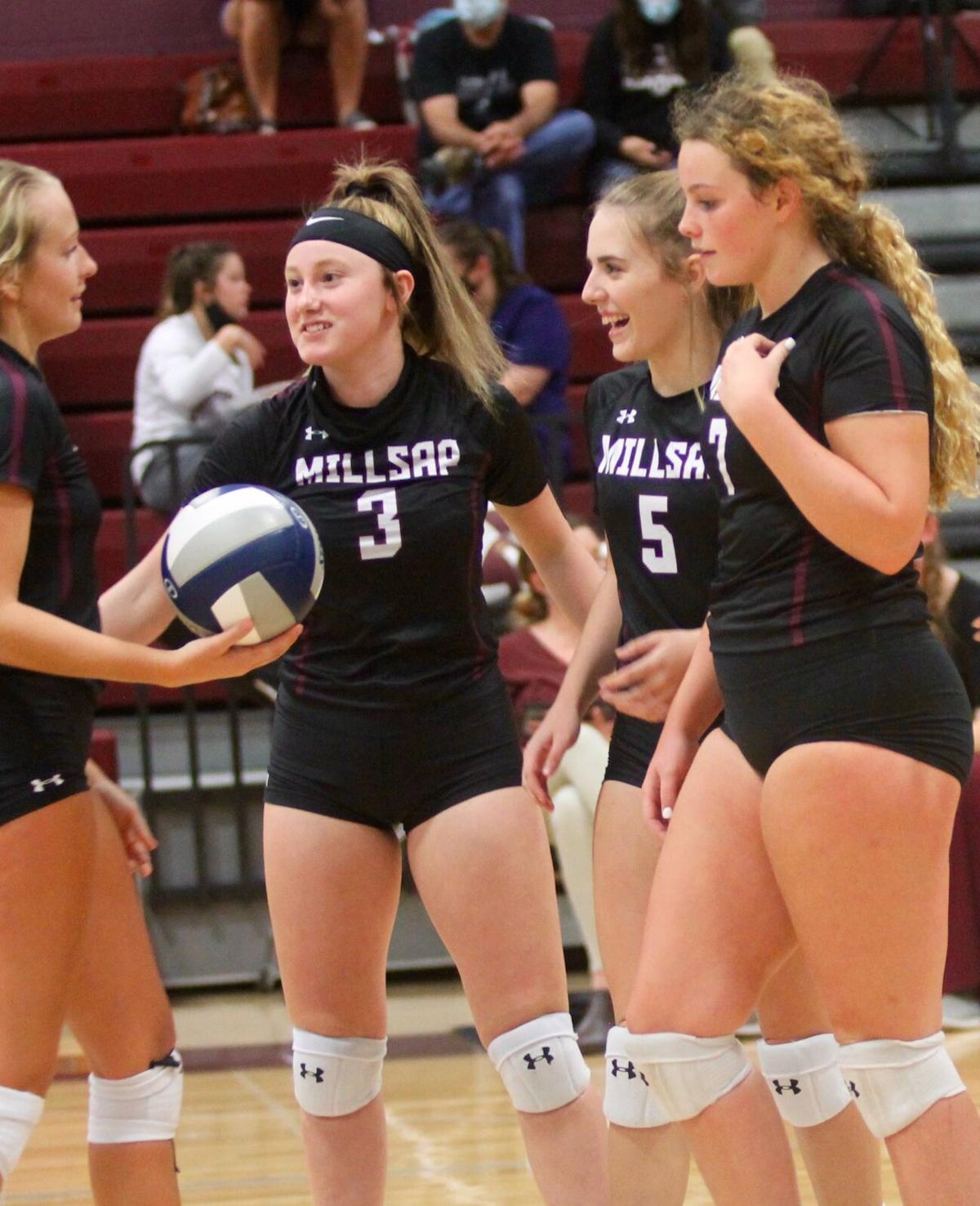 The Paschal Panthers departed Fort Worth on Tuesday, traveled by bus all the way to Weatherford’s NGC Activity Center, warmed up, took the court with eagerness and were swept right back out the door: 25-7, 25-8 and 25-21.

The Lady Roos don’t toy around.

This was Weatherford’s 10th sweep in 13 games.

Weatherford is tied with Boswell at 5-0 in the 6A Region I District 3 volleyball standings. The Boswell game is sure to be a battle, and it is right around the corner — Tuesday, Oct. 20 in Fort Worth.

“We will go on the road and play two of the toughest teams,” said Nicholas Gay, the Roos head coach. “Hopefully our tough non-district schedule and previous district games will have us ready to go and play.”

His team needs only to focus, play their best and not take anything for granted to keep winning, he said.

“We have ability to be as good as we want as long as the girls continue to work together and for each other,” he said.

“I look forward to seeing them continue to grow,” he said.

The Lady Rams are back on track after being hammered in their previous two matches — they gobbled up Hirschi on Tuesday in straight sets: 25-11, 25-23 and 25-17.

Next up for the Rams is a crucial double header with district foe Vernon, a team that is a game ahead in the district standings. Mineral Wells (8-10) hits the road to combat Vernon (5-9) at 4 p.m. and 5:30 p.m. on Friday.

Aledo plays nothing but district games from now until the regular season ends in mid-November.

The Lady Pines headed to Decatur on Tuesday night eager to deal the 20-0 Eagle team its first loss of the season. Instead, Springtown limped home after being swept in straight set: 4-25, 17-25 and 11-25.

Springtown Head Coach Leighann Strickland described the loss as a “tough one” and said few things went the Porcupines’ way all game.

“It just wasn't there tonight,” she said.

The Lady Pines aren’t sitting around crying, though. They were back in the weight room Wednesday morning, preparing for the next game.

“We know Decatur is tough, and we wanted more than what we gave, but in the end we need to learn from our mistakes, allow them to let us grow and work even harder in practice this afternoon,” Strickland said.

Three district games remain on the schedule as Springtown tries now for second place. The final game will be against Krum, the team that is currently in second place.

“We can do it, but we are going to have to work hard for it,” she said. “Nothing comes easy, especially in this district. Anything can happen at any time.”

Against Decatur, Railey Druxman led the team in kills, assists, digs and blocks and will be relied upon heavily moving forward.

Poolville appears destined for its fifth straight district championship and a journey into the playoffs.

The Lady Rabbits shrugged off a couple of recent losses and returned to winning, knocking off the Pirates in three of four sets on Tuesday night.

The Lady Eagles swept Eastland in three sets on Tuesday and have swept their last three opponents. Brock appears to be gaining momentum as it heads into the final three games of the regular season.

After a tough loss last Friday against Peaster, the Lady Bulldogs bounced back and swept the Comanche Maidens in straight sets: 25-14, 25-14 and 25-17.

Allison Keplinger led with three aces, followed by Taylor Cotton and Loren Morazzano with two each.

Millsap (13-9) plays at 6:30 p.m. Friday at home against Brock (13-10). The two teams are battling for second place, and Brock is a game ahead currently. Brock swept Millsap in straight sets in their first meeting in September.

Peaster (16-3) plays at noon Saturday at home against Dublin (8-11) and is expected to be crowned district champ afterward.

The Lady Greys continue to romp, notching its third straight sweep on Tuesday by defeating Woodson. If anyone wonders who will win the 1A Region I District 6 championship, they haven’t been watching Strawn plow through the competition.