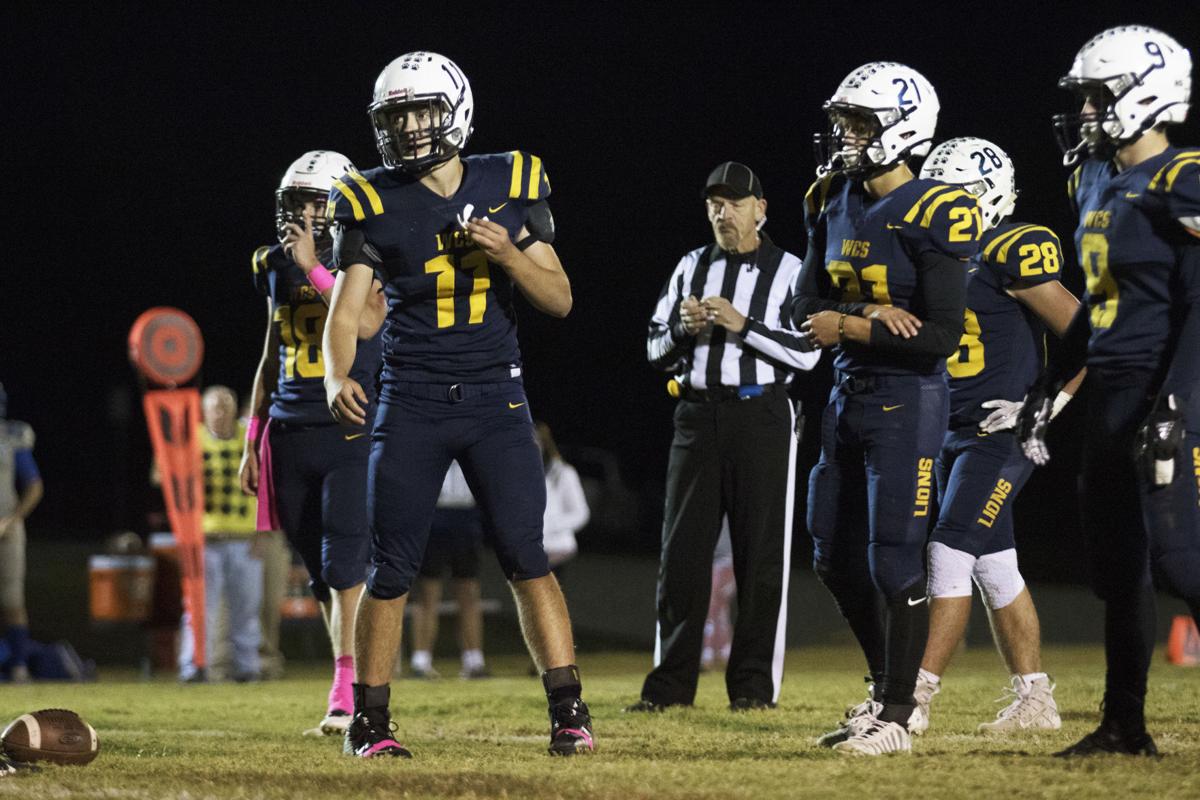 The Weatherford Christian School Lions (12-1) will play the Fredericksburg Heritage Christian Eagles (12-0) in the TAPPS 6-Man, D-III state finals at 11 a.m. Thursday at Midway ISD Panther Stadium. The game is the last WCS will play in 6-man, with the school set to move to 11-man next season. 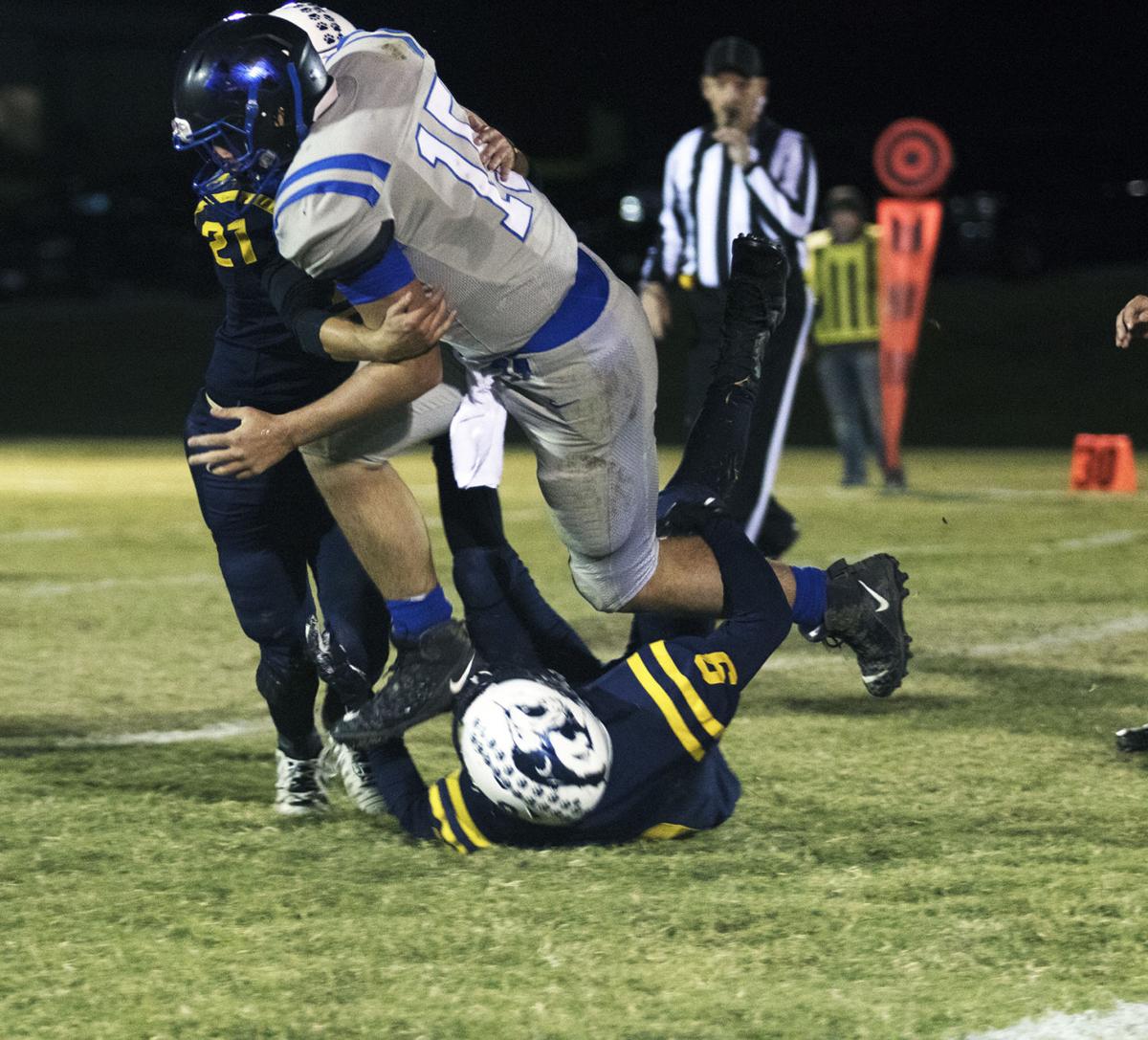 Weatherford Christian School’s Drew Meeks (21), Colton Hasenjeager (9) and the rest of the Lions’ defense face a stiff test in Fredericksburg Heritage Christian, which has averaged 52 points per game this season.

The Weatherford Christian School Lions (12-1) will play the Fredericksburg Heritage Christian Eagles (12-0) in the TAPPS 6-Man, D-III state finals at 11 a.m. Thursday at Midway ISD Panther Stadium. The game is the last WCS will play in 6-man, with the school set to move to 11-man next season.

Weatherford Christian School’s Drew Meeks (21), Colton Hasenjeager (9) and the rest of the Lions’ defense face a stiff test in Fredericksburg Heritage Christian, which has averaged 52 points per game this season.

Baytown may not be the team standing across from WCS come Thursday, but last season’s lone loss still sticks with the Lions entering the upcoming contest, Head Coach Stephen Cox said.

“The guys’ rallying cry has been ‘Unfinished Business,’” Cox said.

“They’re not overly confident, they’re just ready to get there and play. Of course all our players see that we’re 45-point underdogs and they’re ranked higher than us. So they kind of use that as bulletin board material. A lot of people are saying the state championship game was last week between Fredericksburg and Cedar Park.

“But our guys are tested. We’re know what we’re capable of. They know it’s their last one. They’re ready to finish what we started last year.”

However, the Lions’ head coach stressed that is a role his team is used to, as well as one it welcomes.

“It’s a role that we’re used to, but it’s definitely fuel to the guys,” Cox said.

“Just because we know who we are and what we can do, we know we’re a physical team. It’s good for us. I’ve always kind of liked it. We’ll take that role any day.”

With that said, facing an Eagles’ squad which has held 10 opponents this season to single-digit point totals (including three shutouts) while putting up 50-plus points in eight contests will be no trivial matter, Cox stressed.

“They’re very well-coached and do everything well,” Cox said.

“There’s probably more athletic teams out there, but they line up tight, block well and run it right at you. They’re physical.

“They don’t really deviate from their game plan a whole lot. There’s not a whole lot of moving parts. They have a big running back who I think is a freshman, and then they have a little speedy back who’s really good too. They have a great offensive line.”

Cox added that the Eagles primarily use a ground and pound approach, however, the Lions’ head coach stressed that Heritage Christian executes said approach with great efficiency.

They really don’t air it out,” Cox said.

“They threw the ball six times last game, and I know we’ve only thrown the ball six times in the last two games, but that’s just what it called for. But, they will go with a spread look and out of that they’ll run it with their spread back a lot.

“They’re trying to get you one on one. I think the last two games when we charted them, they averaged throwing it about five times a game.”

Cox said his team’s upcoming opponent makes use of a similarly straightforward approach on defense as well.

“On defense, they play a man defense, nothing fancy, they just man up and tackle really well and stay in front of you,” Cox said.

With that said, the Lions have done well putting up their own gaudy numbers this season, scoring 60-plus points in seven games, while holding five opponents to single digits on the scoreboard (including three shutouts).

Eagles’ Head Coach Tim Shipman said the Lions possess so many weapons, especially on the offensive end, that his own team cannot afford to hone in and try to negate any one player.

“Whenever you look at Coach Cox, his system and program and the depth of the Lions, they’ve got a lot of weapons,” Shipman said.

“You’ve gotta look at No. 2 [Jackson Floyd], No. 28 [Wyatt Berry], No. 9 [Colton Hasenjeager], No. 26 [Bryson Smith] is a good receiver, they have a big center in No. 55 [Chandler Stults]. So, you can’t really focus just on one guy, you’ve gotta certainly think about all of their weapons.

“Also with their offense, they run so many different formations, Coach Cox does a great job using all those guys, so I think overall you can’t afford to focus just on one guy.”

While his own team does not enter Thursday’s game with the same underdog moniker as WCS, Shipman said Cox and the Lions have proven a capable contender throughout 2019, something the Eagles’ head coach figures to continue later this week.

“Weatherford poses so many different things we haven’t faced this year,” Shipman said.

“Obviously I’m very proud of our defense and their accomplishments, but Weatherford Christian is a state-caliber team and we haven’t seen any teams of this caliber, so it’s going to be an interesting matchup. I see both teams scoring some points and really having to dig deep to find a way to win.

“Lots of respect for Coach Cox and those guys. It’s a whole different ballgame compared to what we’ve seen so far honestly.”

Darrell Donohue, 77, of Weatherford, passed away January 16, 2020. Cremation services are under the care of Galbreaith Pickard Funeral Chapel. Darrell was born in West, TX to Glenn and Flossie Donohue. Darrell graduated from West High School in 1960. He was employed at General Motors for 38 …